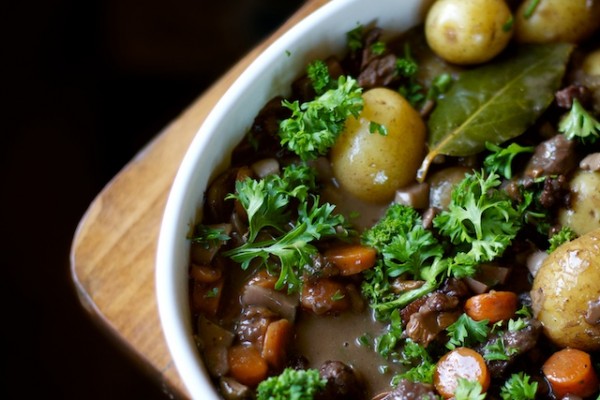 I asked her if I could use her post today mostly because why re-invent the wheel? Also – I love her, she wrote the foreword to my ebook Fertilise Yourself.  Plus I loved her bits and bobs she shared in her original post.  Most of all I want you to know this is the most hormone boosting, fertility pumping, immune helping recipes you’ll ever lay your sweet eyes upon.  I talk about bone broth in my new book – Eat Fat, Be Thin too.  Get on it!

I’ve mentioned on twitter that I’ve been making bone broth and some of you asked for the details. And so I oblige!  I’ve become a big fan for a bunch of overwhelming reasons I’ll outline below. Sally Fallon introduced me to the stuff in “Nourishing Traditions” and since then I’ve followed a community of people who can’t stop raving about it. A lot of nutritionists steer their clients to simply drink bone broth. That’s it. The stuff is so full of good stuff…who needs supplements?

Making it is easy and cheap, albeit not very attractive. See the pics below, or this from Sally Fallon when describing the final stages of cooking:
“You will now have a pot of rather repulsive-looking brown liquid containing globs of gelatinous and fatty material. It doesn’t even smell particularly good.”

I buy the bones from the farmer at the farmer’s market for $2 a bag. But if you’re not near a farmer’s market, your butcher will sell some to you (or give them to you!).
I make a batch and freeze it for soups and stews (in 500ml containers) and also in 200ml serves to drink as a soup, or to use for braising veggies (instead of using oil). You basically use it as you would stock, but it’s richer, more gelatinous and more nutritious.

Here’s a bit of a cheat sheet (if Sally hasn’t scared you off)!

bone broth: the deal
Bone broth is like normal stock but made with big, cheap bones which are simmered for a very long time (24 hours-plus).  At the end of cooking, a stack of minerals have leached from the bones and into the broth that the bones crumble when pressed lightly.

why would you?
Because it is soooo good for you.

1. Our immune systems love it
It’s rich in calcium, magnesium, phosphorus and other trace minerals, which are easily absorbable, thus assisting the immune system. Mark’s Daily Apple has a great article breaking down all the nutrients found in bone broth.

3. It’s a digestive aid
It helps break down grains, beans, legumes, vegetables and meats and is hydrophilic in nature, which means that it facilitates digestion by attracting digestive juices to food in the gut. Bone broths have been used successfully in treating gastro-intestinal disorders, including hyperacidity, colitis, Crohn’s disease, and infant diarrhea.

4. It rebuilds the gut
Chris Kresser says the gelatin in bone broth helps in “repairing the integrity of the gut“:
“Homemade bone broth soups are effective in restoring a healthy mucosal lining in the stomach. Bone broth is rich in collagen and gelatin, which have been shown to benefit people with ulcers. It’s also high in proline, a non-essential amino acid that is an important precursor for the formation of collagen.”

5. It combats stress + inflammation.
Which is a boon for AI sufferers. Glycine is an “inhibitory” neurotransmitter, and promotes natural sleep and has a “quieting”, protective antistress action. Read more here.

7. It’s great for nails, hair and women generally.
Rich in both gelatin and collagen it promotes bone and joint healing in addition to supporting digestion.It helps to support the connective tissue in your body and also helps the fingernails and hair to grow well and strong.

Also it’s super cheap. I just made 3.5 litres of the stuff and then I got excited and added up how much it cost me…ready…$3.90. By using the bones from leftover roast chickens matched with vegetable scraps you’ve saved, you can whittle that paltry sum down even lower. 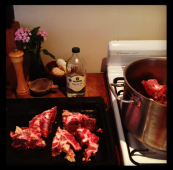 Place the bonier bones (ie not much meat) in a very large pot with vinegar and cover with water. Let stand for one hour.

Meanwhile, place the meaty bones in a roasting pan and brown at 350 degrees in the oven. When well browned, add to the pot along with the vegetables.
Add additional water, if necessary, to cover the bones; but the liquid should come no higher than within one inch of the rim of the pot, as the volume expands slightly during cooking.
Bring to a boil. Reduce heat and add the thyme and crushed peppercorns.
Simmer 12-72 hours. 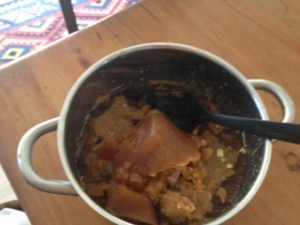 As Sally says: You will now have a pot of rather repulsive-looking brown liquid containing globs of gelatinous and fatty material. It doesn’t even smell particularly good.

Strain the lot (you’ll need to use tongs our your hands to pull out the bones) into a large bowl. Let cool in the fridge and then… 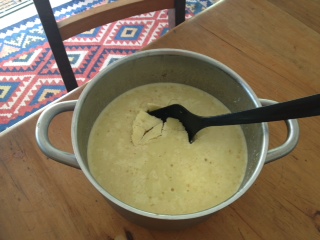 This is a little grose, but somehow satisfying. The congealed fat on top is usually a good 1-2cm thick and you can literally pick it up in chunks (like ice over a pond) and turf it.
Divide into containers and freeze/eat.

some things to know

some things to do with bone broth