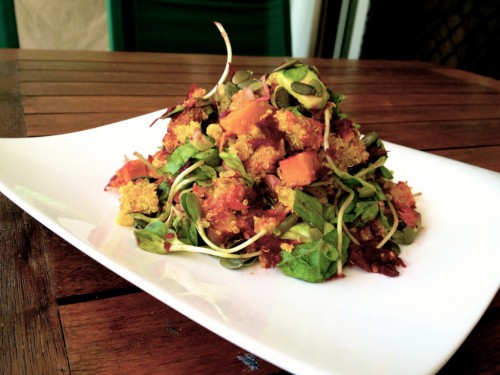 Last week I introduced you to the divine soul that is Tara Bliss. This week she is sharing with us her Epic Chakra Quinoa! Hold your hats peeps this ones going to rock your world.

I admit – I don’t know much about chakra’s – I’m all about Chinese Medicine. But what I do know is the power of specific points in the body. Some people struggle with the idea of ‘energy’ points – if you don’t know much about it, it can seem a little voodoo or whacky. When you break it down, it’s all about how our body moves ‘stuff’ around (or doesn’t move for that matter). In Chinese Medicine we see this as ‘Qi.’ Qi isn’t anything more than what you think it to be – the way I see it, it is blood, nutrients and energy that is propelled by our bodies own rhythm (perhaps by our heart or something more). In any case, don’t let a label cut you off. It’s simply as much (or as little) as you want it to be!

To cook the quinoa:

Soak 1 Cup quinoa for 30 minutes, drain, and then cook on the stove in 2 Cups water.Once it reaches the boil, turn the heat right down, and keep an eye on it until all the water has evaporated and you have light, fluffy quinoa (this shouldn’t take any more than 20 minutes).

Heart Chakra
You know what to do here… Go berserk with the greens, baby! Kale and silver beet were a no show at my markets this week, so instead, I used:

Throat Chakra
Don’t worry, you don’t have to scratch your head while trying to decide upon something that’s not only blue, but edible to add to this dish… Our throat chakra governs free will, choice, and expression – so consciously deciding that you’re going to prepare a vibrant, organic, intention-filled meal, balances your throat. How cool is that!?

Crown Chakra
Make meal time a spiritual practice by preparing, serving and eating it in the moment. Minimise distractions, consciously chew your food, taste the different flavours, and feel the textures in your mouth. Put your fork down in between mouthfuls. And don’t forget to breathe! It seems like a silly thing to say, but most of us are unconscious when we eat, myself included. Less hoovering, more appreciation.

Once you feel satisfied with your ingredients, you can jazz your quinoa salad up however you like.

The best part? When on one magical spoonful you get some beautiful caramelised pumpkin, a leaf of basil and salty olive. Yum.

Tara Bliss is a spirit-fueled coach and healer, motivational speaker, and creator of The Party Girls Guide to Peace. Her mission? To kick-start an avalanche of gutsy, fear-busting confidence and love (all with a side serve of swagger)! Think of her as your crystal-toting, skateboard-riding, raw-dessert-loving lumière, unveiling the path to peace and freedom. Her original medicine? Fierce and curious vulnerability.