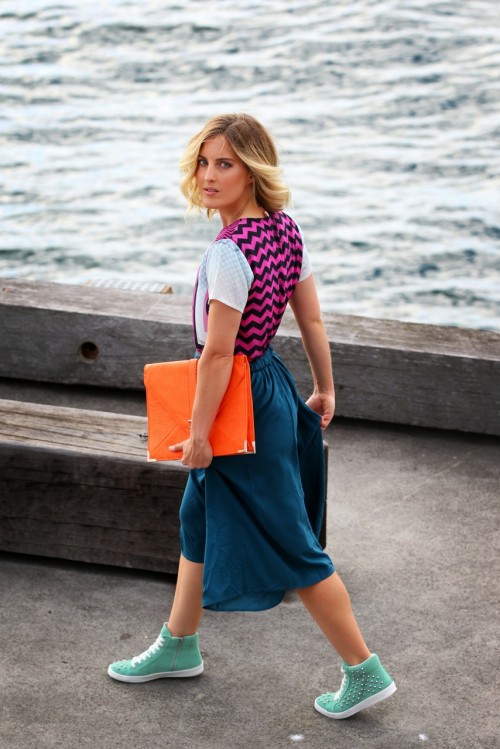 Amy Molloy is one of our Ambassadors for our fresh and shiny new christmas campaign launched Monday – #just1wish.  Amy has been a long time friend and wonderful supporter, helping spread the healthy hormone and wellness word.  As you’ll learn, Amy has a story to tell (turns out she’s great at getting words onto paper as a writer and former editor of Grazia magazine).  She shares openly something all women can take a little golden nugget of inspiration from.  As an Ambassador, I asked Amy to share her one wish. If you’re yet to jump onboard – PLEASE DO!  All you need to do is share the image below on your social media the share the one wish you wished you knew to tell your younger self also nominating two friends to do the same.  It’s all in the spirit of giving this christmas and raising money for A21.

If I could pass on one wish to my younger self, it wouldn’t be a sentence – it would be a feeling. How I felt, a few months ago, when I went on a camping trip with my boyfriend and a group of six friends, and at sunset we all went skinny dipping in the moonlight. As we ran into the surf – six different shaped bodies, but matching grins – I thought back to my 21-year-old self, who would have been sitting on the beach, wrapped in a towel, wishing and wanting to join them. Instead, I led the charge into the water, chucking aside the dinosaur onesie I’d been wearing (don’t ask), and got to experience the unique sensation of being naked in nature. Totally naked. And not caring who saw.

When I was a little girl – before the age of 4 – I was well known in our family as an uncontrollable nudist. At every opportunity I’d strip off, and streak about (around the house, shopping centers, my parents offices), but then something shifted. I’m sure it caused by a lot of small, and not so small triggers – the gymnastics coach who said I was fat, my dad’s life threatening illness, my own perfectionist mentality. Whatever the cause, for the next twenty years (two whole decades!) I became the schoolgirl who tied a jumper around her waist all the time, the teenager who became addicted to laxatives, the twenty-year-old who turned down every dinner date because she only ate solid food on a Sunday. It seems crazy to me now, but for a long time it was my reality. My younger self thought there was no way out, that I would be trapped in that mindset forever. But here’s the good news – it turns out that it possible to change your world, if you flip your mindset.

For me, the game-changing moment came from an appointment with a hypnotherapist who told me to think of my body as my child. If you had a little girl, would you judge her, criticise her, starve her and punish her, when all she had done was stand by you? No, of course not. And yet I was doing this to myself day after day, week after week, year after year.

I would also tell my younger self that unfortunately a lifetime’s worth of damage can’t be undone overnight (and probably show her this blog post to warn her). Because it turns out your car won’t turn on straight away if you don’t put fuel in it for two decades!

This is why, when Nat asked me to be an ambassador for Just1Wish I jumped at the chance to join such a wonderful campaign. I can’t go back and save, soothe or protect my younger self now but, I can hopefully give advice to any girl or woman in my past situation, who breaks down their body into parts – wobbly belly, dumpy legs, short arms – rather than seeing it as a whole.

When Nat launched the just1Wish campaign last Wednesday, the advice I posted on my Instagram feed was this – “That you realise your body is your friend not your enemy, that you should treat it with compassion and pride – and learn to be happy naked now.” It is also why this weekend, I’m planning to strip off and dance in the ocean – minus my swimmers – in honor of my younger self, for her of her insecurities, fears and demons.

I’m not saying that I’m perfect, but maybe that’s okay too. I don’t think I’d want to look at my body and think “wow, I’m awesome”. I don’t think that’s really what compassion and self-love is all about.

There is still a part of me who worries about running in front of my boyfriend in case my bum jiggles– but I’ll do it anyway, because I know he doesn’t care one bit. Which brings me to my final piece of advice for my younger self. “Realise you don’t have to think you’re perfect – but if you love yourself just enough, one day you’ll hopefully meet someone who thinks you are.”