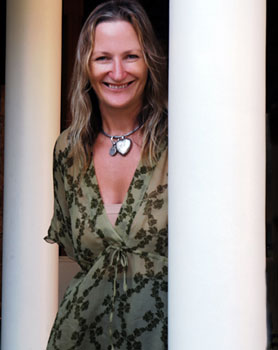 In my theme of people that I love – I want you to meet Sam. Same is a therapeutic chef and woman extraordinaire. I asked her the questions. Here’s what she had to say.

At what point did you realise you needed to make necessary changes toward your health, rather than rely on others telling you what was wrong/how you feel?
My Dad suffered from cancer for 5 years before he died aged 62 in 1991. During these years, I felt I knew nothing about nutrition even though I had grown up in the restaurant business and learnt to cook from the age of 6. So I set about slowly learning food as medicine and when my brother and I sold the Grace Darling hotel in Collingwood and I went on to train in Natural Medicine, Pilates and fitness.

How long have you been practicing ‘great health?’
I became very interested in health, especially nutrition in the mid-90’s, however my old bluestone pub was not the right vehicle to entertain organic food and it took another ten years for it to even be acknowledged – for taste alone – in the mainstream marketplace. I have been about 80% organic for 15 years now and founded the organic cooking school in 1999.

What treatments do you combine – what works for you?
Chinese medicine works very well for me. Partly because I understand some of its mechanisms and the idea of Qi and the rest I leave to imperial wisdom. If I get very depleted then acupuncture, cupping and shiatsu are my absolute remedies. I can do the nutrition bit on my own so I supplement with magnesium, vitamin C and try to eat as much broccoli and cauliflower and dark green leafy vegetables I can. I get my pathology and girly bits tested every 12 months. I believe that a string of really good night’s sleep can do wonders!

What’s the greatest thing you have gained from grabbing the reigns and taking control?
Years before my Father’s death, I had a horrific motor bike accident on the streets of Melbourne when I was 19 and spent the better part of 12 months learning to walk again and years of rehab followed. One of the healing break-thoughs for me was being told by a physio I would never really run again, so I took up the challenge and began competing in middle distance fund-raising running events such as the Mothers’ Day Classic with good results. This was a turning point – that the body has an incredible ability to heal itself and given the right mindset, can overcome challenges of massive proportions.