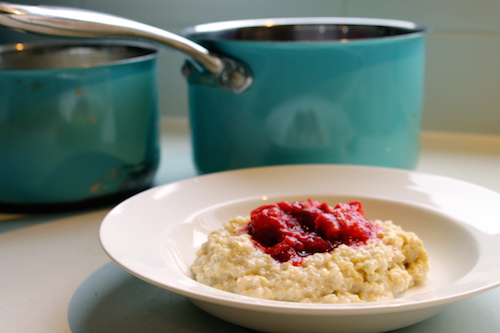 It’s been a whilst since I’ve posted something sweet – in fact it’s been a long time coming that I’ve got myself busy in the kitchen to come up with something off the cuff. There is no excuse – I’m simply pregnant and enjoying more down time. BUT my insides started shaking and gave me a super boost of energy the other night which resulted in this creamed quinoa pudding.

Quinoa is the ace of spades in grains. Actually that’s a fib. It isn’t a grain – it’s a psuedograin. It comes from the same family as beets and spinach. Who knew? What makes it super awesome is that it is an excellent substitute for rice or similar grains – it’s gluten free! It’s versatile (savoury or sweet) and ranks high on my list of fertile foods as it is chocked full of iron, essential amino acids, calcium and magnesium.

Trim and chop the rhubarb, ready to cook. Simmer over a medium heat in approximately 1/2 – 3/4 cup of water (enough to at least cover half the rhubarb) and allow to stew. Remove from heat and set aside.
Meanwhile, in a separate saucepan, place milk, vanilla seeds (scraped from vanilla bean) and maple syrup into the pan. Slowly start to warm the milk, adding the partially cooked quinoa and stirring regularly. Allow to cook for a further 10 minutes or until quinoa is soft.
Whisk egg and slowly add to milk mixture, stirring the entire time to prevent lumps forming. This will bring the mixture to a custard like consistency.
Chop strawberries and add to the rhubarb.

Serve the pudding in a bowl topped with the rhubarb coulis.

Season 2 - Episode 9: How your emotions make you a better entrepreneur with Scout Sobel