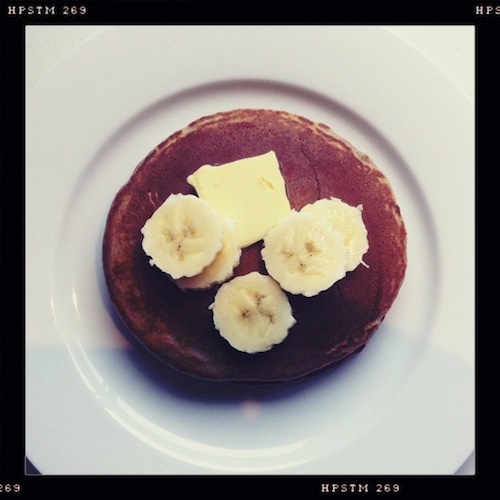 If you’re not familiar with buckwheat, it’s an ancient grain that has been around for a really long time (from 6000BC according to the pack!). Originally found in southeast Asia, it’ packed full of strong amino acids and nutritionally surpasses all other flours. It has a nutty flavour that works really well when the flour is made into pancakes! Best of all it is gluten free so everybody can enjoy it!

Separate eggs, placing yolks into a larger bowl. Add flour, milk and baking soda to the yolks and stir until well combined, forming a smooth batter.
Add a pinch of salt to the egg whites and whisk until they form stiff peaks.
Using a spoon, fold egg whites into the batter to combine.
Heat a nob of butter in a fry pan and cook pancakes one at a time, turning when bubbles rise to the surface.
Enjoy anyway you like them! If you’re keeping sugar on the low down like I am, you might like to try adding corn to the last stages of the cooking process – in the pan. (to do this – once batter is in the pan, top with corn before flipping over).