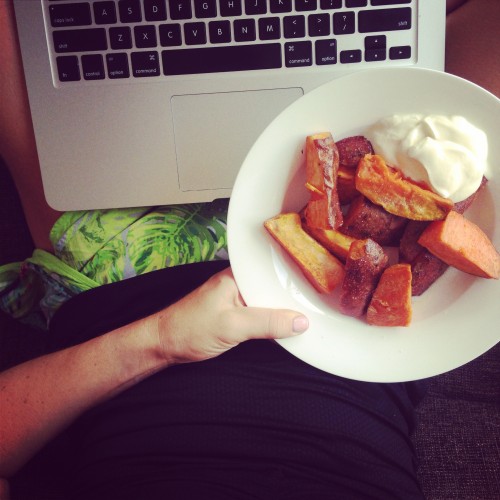 I’ve a confession.  I have a chip fetish.  I crave hot chips, in fact I generally crave salty foods (yes my kidneys!!).  Anyway, these babies have become my go to be it for a snack, for lunch or to accompany a meal.  They are super quick and pop them on the delish-o-meter and they’re off the chart!

All you need is…

1 sweet potato per person being served, peeled and chopped into wedges.
3 tbs of coconut oil
Plus a very generous sprinkle of salt.
(you might like to play around with other seasoning – paprika, oregano or even some garlic!)

Fill a large saucepan of hot water and place wedges in to boil for around 10 minutes or until they just become soft.
Drain and vigorously bash the sweet potato against the saucepan to roughen the chip edges.  This helps them become crunchy.
On a baking dish, lie the wedges side by side.  You can roughly tip them in, but the more on top of each other they are, the less crunch you’ll get.  You might like to spread it over a couple of oven
trays.
Sprinkle with oil, salt and pepper.
Cook in a moderate oven (180 degrees) for 20 minutes or until cooked and slightly crunchy.

Serve with your choice of either hummus, sour cream or coyo.

Season 2 - Episode 7: Kindness is your best Superpower with Colleen Callander